What do you do with leftover buttons? I found an idea on the net and went crazy!!! Over about 4 weeks I made 328 BUTTON MAGNETS. They became presents for family and neighbors. The good thing is that my supply of buttons is WAY down. I also had a lot of fun! I hope this inspires you do to something wonderful with your buttons!

Tools? – long nose pliers, metal cutters, glue, strong magnets (I used .75″ round ones), buttons, a toothpick (for pushing things around), a work mat (an old cutting board works well)

I sorted and spread out as many buttons as I could handle at a time. I tried 2 different types of glue, one for attaching “gems” to clothing and another called “Liquid Fushion”. I liked the Liquid Fusion best. It does take time for the glue to dry, so sometimes you have to figure out how to glue things in stages.

Because I had lots of smaller shirt buttons, most of the magnets were in the shapes of flowers or butterflies. I tried to make them in sets that had similar colorings and shapes so they would make good gifts.

Some of them were quite unique.

After I finished the “regular” buttons I tried my hand at some unique ones. We now have this “dog” on our refrigerator. It is actually made up of unique buttons and topped with more buttons and items that we found on the beach. It just happens that the separate magnets can be put together into this shape. 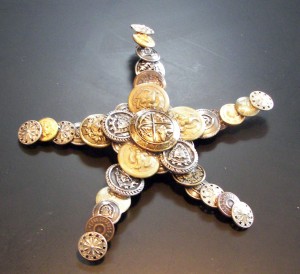 I found that most of the metal buttons I had wouldn’t glue on the magnets well because they weren’t flat enough. So, I glued them together (with lots of glue and some nails to stabilize them) into this starfish shape. I think it will be hung on the wall as it is too delicate to be handled regularly.

Have fun with buttons!